By Editorial
Linkedin
Twitter
Facebook
Email
Imprimir
WhatsApp
Climate change and globalisation are accelerating the spread of species outside their natural habitat. This is the case of hymenopterans from Asia that are spreading to other continents, whose bites on people are associated with acute kidney diseases. Spanish scientists want to raise awareness of their health consequences. (Avispa asiática en Portugal. / Charles J. […] 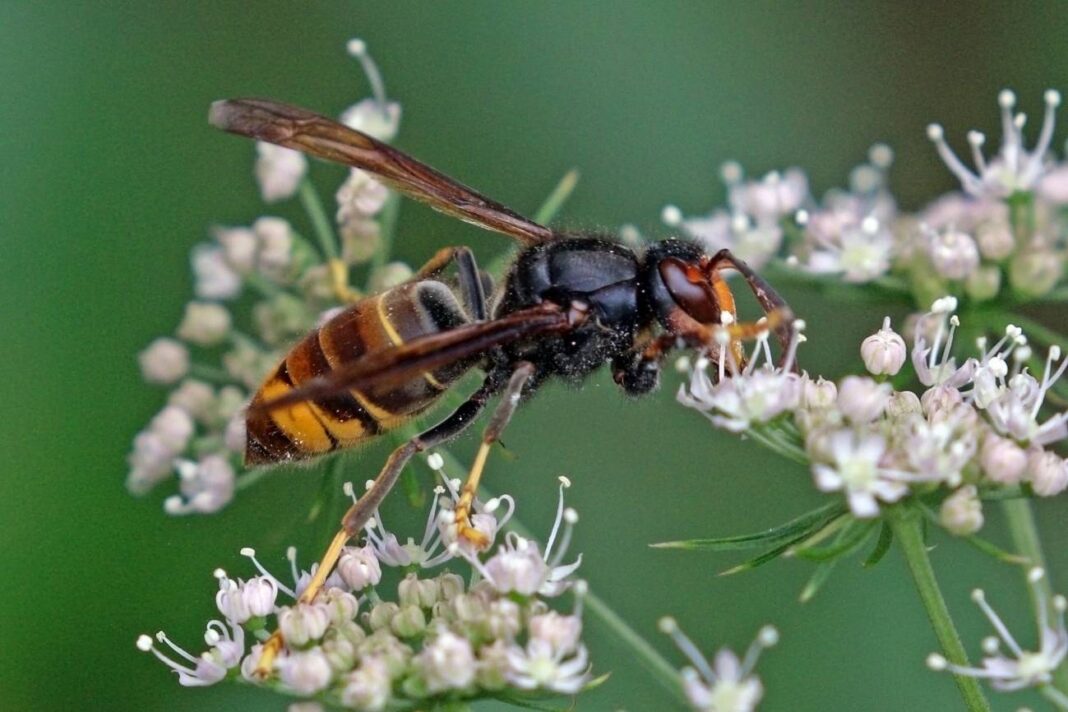 Climate change and globalisation are accelerating the spread of species outside their natural habitat. This is the case of hymenopterans from Asia that are spreading to other continents, whose bites on people are associated with acute kidney diseases. Spanish scientists want to raise awareness of their health consequences. (Avispa asiática en Portugal. / Charles J. Sharp)

pain, swelling and reddening of the skin is what causes a common wasp sting. However, the reaction intensifies when it is the one of the Asian wasp, whose sting is similar to that of a large pin, causing acute pain, and later a strong stinging, similar to a burn. The more widespread skin inflammation and pain lasts for about 24 hours.

These insects, which originate from the Asian continent, are spreading to other regions due to the climate crisis or globalisation. The Asian giant hornet (Vespa mandarinia) is making its way to America, and the Asian wasp (Vespa velutina) and the Oriental hornet (Vespa orientalis) to Europe. The latter has been known to be present in Cádiz, Spain, since 2012.

In their countries of origin, experts had already documented and associated, in addition to the reaction of the sting itself, other health effects, such as acute renal failure. “The literature on wasps and acute renal failure is scarce and mostly from Asia, so nephrologists outside Asia are not familiar with this health problem,” explains Alberto Ortiz, a researcher at the Fundación Jiménez Díaz and co-author of an editorial in the Clinical Kidney Journal.

According to the authors, although this complication has probably been present for millennia, existing health reports on the association between Asian wasp stings and kidney failure are relatively recent. In fact, the first one was made in Thailand in 1972, and since then most of them have been from Asia. As of January 2022, the databases contained 73 reports from 19 countries, 15 of them in Asia.

“Nephrologists in Europe and North America may not be aware of a health problem that is increasingly recognised,” says Sol Carriazo, a researcher in the Department of Medicine at the Autonomous University of Madrid and co-author of the commentary. On both continents, the toxicity of native wasps is lower than that of Asian wasps.

How to react to stings

However, what does reach the experts is the news about these invasive species and the social alarm created through the media. V. mandarinia has been detected since 2019 in western British Columbia (Canada) and Washington State (USA), and is a problem for bees and humans.

“In Europe, V. velutina arrived in Bordeaux, France, in 2005 and has since spread to Italy, Germany, Belgium, the Netherlands, the UK, Spain and Portugal, where it kills honey bees. Both species can induce acute kidney damage or be lethal in humans,” says Ortiz. In addition, the black shield wasp (V. bicolor), native to China, and the oriental hornet (V. orientalis) have also been detected in Spain.

According to a study, carried out by Chinese researchers at the Suining Central Hospital from the analysis of 1,131 patients with wasp stings, the Asian giant hornet and the Asian wasp were among those causing the most hospitalisations, although most cases were caused by the black-tailed hornet (V. basalis).

The hospital established a protocol with anti-allergic or anti-shock treatment; local treatment (removal of stings, local dexamethasone and lidocaine); elimination of toxins and prevention of acute kidney injury caused by rhabdomyolysis and haemolysis; analgesia and tetanus antitoxin. In severe patients with multiple stings, they used continuous venous haemofiltration, haemoperfusion or plasma exchange to improve prognosis with the aim of expelling toxins that could lead to organ failure.

To reduce mortality in the most severe cases, the scientists applied a wasp sting severity assessment or index to 153 patients in 2020 based on the observation of four aspects: tea-coloured urine, number of stings, lactate dehydrogenase -an enzyme found in different tissues of the body- and total bilirubin.

If the severity index results are equal to or greater than three, experts suggest the need for an early plasma exchange (within 24 hours of the sting). However, under these same conditions, they do not consider continuous venovenous haemofiltration and haemoperfusion to reduce mortality.

Although this methodology still requires external validation, the authors suggest that the information it provides could serve as a guide to action and raise awareness of the effects of these attacks.

€1.8m for 800 former retail workers in the Netherlands

Health in the EU: shift to prevention and primary care is the most important trend across countries

The electronic cigarette is not free from toxic elements

This website uses cookies to improve your experience while you navigate through the website. Out of these, the cookies that are categorized as necessary are stored on your browser as they are essential for the working of basic functionalities of the website. We also use third-party cookies that help us analyze and understand how you use this website. These cookies will be stored in your browser only with your consent. You also have the option to opt-out of these cookies. But opting out of some of these cookies may affect your browsing experience.
Functional
Functional cookies help to perform certain functionalities like sharing the content of the website on social media platforms, collect feedbacks, and other third-party features.
Performance
Performance cookies are used to understand and analyze the key performance indexes of the website which helps in delivering a better user experience for the visitors.
Analytics
Analytical cookies are used to understand how visitors interact with the website. These cookies help provide information on metrics the number of visitors, bounce rate, traffic source, etc.
Advertisement
Advertisement cookies are used to provide visitors with relevant ads and marketing campaigns. These cookies track visitors across websites and collect information to provide customized ads.
Others
Other uncategorized cookies are those that are being analyzed and have not been classified into a category as yet.
Necessary Always Enabled
Necessary cookies are absolutely essential for the website to function properly. These cookies ensure basic functionalities and security features of the website, anonymously.